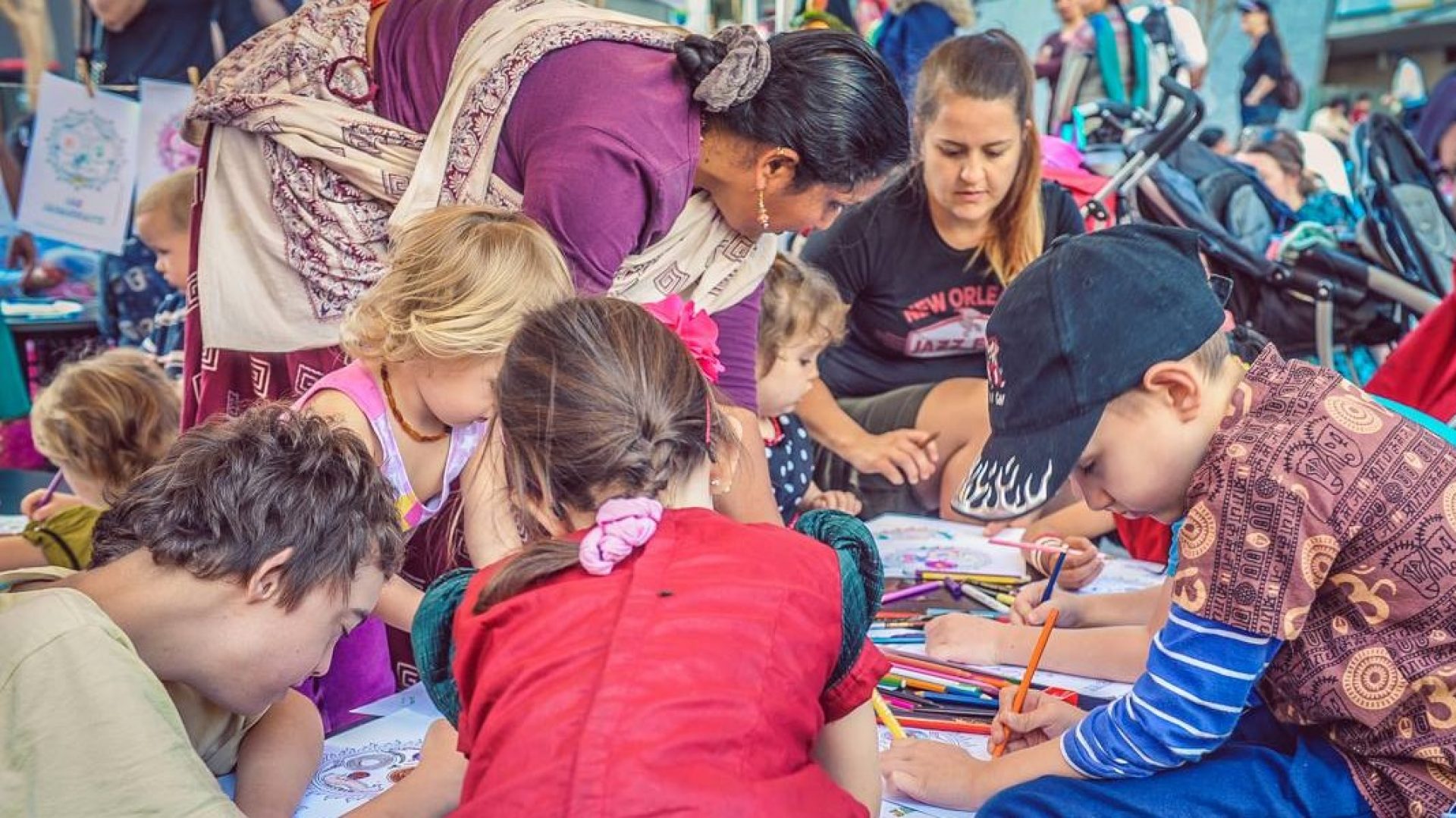 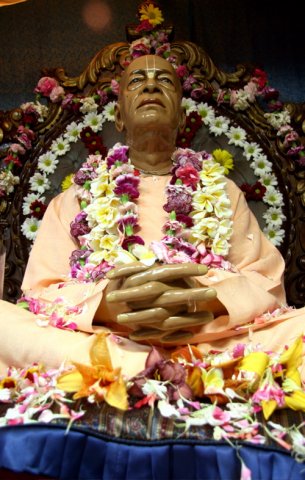 “The lotus feet of Lord Nityananda are cooling like a million moons.”

One should take the shelter of the lotus feet of Lord Nityananda Prabhu, for He is the original spiritual master. It is by the mercy of Nitai that we can obtain love of Krishna.

Lord Nityananda appeared about twenty years before the appearance of Chaitanya Mahaprabhu. Nityananda-trayodasi is an important celebration for Gaudiya Vaishnavas, as without the mercy of Nitai, one cannot get the mercy of Nimai.

Sri Rama-navami is the glorious appearance day of Lord Ramachandra. Srila Prabhupada writes in his commentary to the Srimad-Bhagavatam,

Being prayed for by thedemigods, the Supreme Personality of Godhead, the Absolute Truth Himself, directly appeared with His expansions and expansions of the expansion. Their holy names were Rama, Lakshmana, Bharata, and Satrugna. These celebrated incarnations thus appeared in four forms as the sons of Maharaja Dasaratha.

The Lord descends on this material world out of causeless mercy and displays various transcendental pastimes as a human being so that human beings can become attracted to Him, associate with His devotees, and become able to go back to Godhead.

On Rama-navami, Lord Ramachandra’s pastimes are discussed in the morning. Murtis of Their Lordships Rama, Lakshmana, Sita-devi, and Hanuman are decorated with beautiful outfits, flowers and jewels, and placed on the platform below the altar. Devotees assemble at the temple at noon. An abhisheka for the Salagrama-sila is performed amidst kirtana, and flowers are offered at the lotus feet of Their Lordships (pushpanjali). The devotees fast till sunset on Rama-navami day.

Nrisimha-chaturdasi is the divine appearance day of Nrisimhadeva, Lord Krishna’s man-lion incarnation, who removes all obstacles on the path of devotional service out of His great compassion.

The Supreme Personality of Godhead in His transcendental form of Lord Nrisimhadeva is always ready to kill the demons who always create disturbances in the minds of honest devotees. To spread the Krishna consciousness movement, devotees have to face many dangers and impediments all over the world, but a faithful servant who preaches with great devotion to the Lord must know that Lord Nrisimhadeva is always his protector.

At dusk a maha-abhisheka is performed to our Deity, technically called Sthanu-Nrisimha because of His standing pose, with sandalwood oil and other precious oils. Since the Deity has performed unbelievable miracles in the lives of several devotees, there is naturally great enthusiasm amongst the devotees. Nrisimhadeva is offered a new dress too. After the arati, anukalpa-prasada [i.e. prasada as on ekadasi] is honored by the devotees.

Srila Bhaktivinoda Thakura, in his Navadvipa-bhava-taranga, writes of the significance that worship of Lord Nrisimhadeva has for a Gaudiya Vaishnava:

Therefore, I pray to the feet of Lord Nrisimhadeva to purify my heart and give me the desire to serve Krishna. Weeping, I beg at the lotus feet of Nrisimha that I may worship Sri Sri Radha and Krishna at Navadvipa-dhama, free from all obstacles.

The devotees aspire for such perfection under the shelter of Sri Nrisimhadeva.

Jhulana-yatra is a festival to celebrate Radha Krishna’s pastime of swinging on a golden swing everyday until Balarama-purnima.

Srimad Bhagavatam Narration of Lord Balarama’s Appearance Lord Balarama is the adi-guru, the original spiritual master. In Chaitanya Lila, Lord Balarama appears as Lord Nityananda, the bestower of mercy to even the most fallen conditioned soul. Therefore His appearance as the son of Rohini and Vasudeva is celebrated by devotees with great jubilation.

Janmastami Festival is the major festival of the year and the program runs from late afternoon all the way through until 12 midnight and consists of an abhisek, dramas, Krishna katha, bhajans, kirtans, musical performances by young and old devotees. Bhaktivinode Thakur writes in one song that these Appearance Days – Festivals of the Lord are the mother of devotion for all devotees. One can make very rapid spiritual advancement by participating in the Festivals of the Lord’s Appearance Days and the devotees are very enthusiastic to come to the Temple on these Festival Days and serve the Lord in many different ways.

Srila Prabhupad’s Appearance Day is a very special day for all ISKCON devotees as they joyfully glorify their eternal saviour Srila Prabhupada on His appearance day.
Srila Prabhupada was sent by the Lord to fulfill Caitanya Mahaprabhu’s prediction- Prtvithe ache yata nagaradi grama, sarvatra pracara haibe more nama: In every town and village of the world, My name will be heard.
Srila Bhakti Vinoda Thakura wrote in his Sajjona-tosani, “Soon there will be a time when the chanting of Krishna’s name will be heard in England, France, Russia, Germany and America.”
Srila Prabhupada appeared on Nanadotsava. Nandotsava means: Nanda Maharaja’s huge festival celebrating Krishna’s birth. Nanda Maharaja dressed in luxurious garments and distributed profuse charity to everyone in his kingdom. He gave away opulent cloth and ornaments and two million richly decorated cows to the brahmanas. Vraja was alive with vibrations of Vedic hymns and beautiful decorations and everyone was experiencing unending happiness. Bursting with bliss, the Vrajavasis expressed their joy by throwing butter, yogurt and ghee all around.

One hundred years ago, on that most auspicious spiritual occasion, Srila Prabhupada appeared to fulfill the mission of Lord Krishna. Srila Prabhupada grew up as a pure devotee of the Lord and distributed Krishna Consciousness everywhere.
Srila Prabhupada made a perfect appearance, led a perfect life and had a perfect departure. Srila Prabhupada lives forever through his books. This legacy will always provide the devotees with Lord Caitanya katha and teach everyone to chant the Maha mantra.

The divine appearance day of Srimati Radharani, the eternal consort of Krishna, the Supreme Personality of Godhead

Radhastami is a very special day for all the Gaudiya Vaishnavas, as by obtaining the mercy of Srimati Radharani one can easily achieve Krishna-prema. Radha is Krishna’s dearest servant, and is His pleasure potency.

Srimati Radharani’s glorious birth occured on the eighth day of the bright moon in the month of Bhadra. Although generally not full on that day, the moon appeared full to celebrate Radharani’s appearance in this world. Among all of Krishna’s consorts in Sri Vrindavana, Srimati Radharani is the greatest. In fact, She is the queen of Vrndavana. At Sri Mayapur Chandrodaya Mandir, we are fortunate to also worship Her eight dearest friends Lalita, Tungavidya, Chitra, Champakalata, Vishakha, Indulekha, Rangadevi and Sudevi.